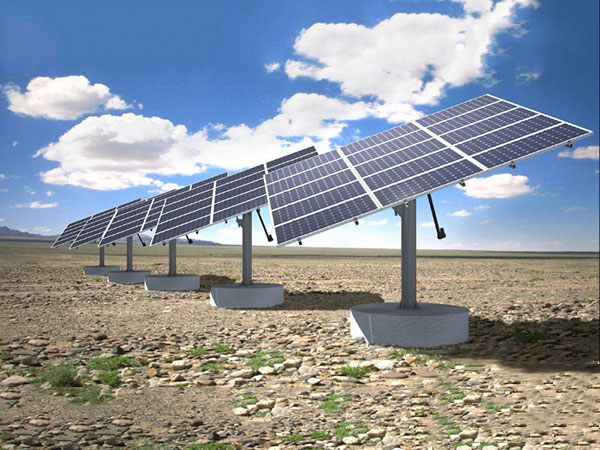 As an important part of renewable energy utilization, research on solar photovoltaic power generation technology is very active, but photovoltaic power generation efficiency is low, generally only 16% to 18%, and the cost of power generation is relatively high. These are important factors restricting its large-scale application. Before there were high-efficiency photovoltaic cell materials, in order to collect as much solar energy as possible, it was important to make the most efficient use of solar radiation, so that photovoltaic cells always track the direction of sunlight. At present, many research methods and design schemes have been proposed in the tracking device, and an advanced automatic tracking system has been designed, and there are many tracking analyses.

Before the 1990s in China, because most photovoltaic power plants were installed in remote areas and maintenance was difficult, the tracking system added a rotating mechanism and corresponding mechanical mechanisms, and the reliability was significantly reduced. And the tracking error is large, not only can not improve the power generation efficiency, but will cause uneven light, hot spots and other effects on the panel, greatly shortening the service life of the panel, and at the same time, the purchase of mature technology from other countries greatly increases the system cost.

In March 2009, Konoweiye Control Equipment Co., Ltd. independently developed a 10MW “sunflower” (two-axis) photovoltaic automatic tracking system in China. The solar panels of the system are like sunflowers, which enhance the solar radiation reception by tracking the sun’s movement in real time. At a suitable latitude, it can increase the power generation by about 40%, can be better suited to frosty, snow, and dusty environments, and can work reliably in unattended photovoltaic power plants. From the perspective of whether the tracking is continuous, this photovoltaic automatic tracking system uses a step tracking method. Compared with the continuous tracking method, the step tracking method can greatly reduce the energy consumption of the tracking system.

The TZG-2 automatic solar tracking test bench produced by Jinzhou Sunshine Technology Development Co., Ltd. is a high-efficiency sunlight gathering device for solar product testing, research, testing, and aging. The whole tracking process adopts microcomputer control, and uses two modes of light sensor and astronomical positioning and tracking, automatically switching between the two modes according to weather conditions, to achieve high-precision sun tracking. The system can also perform positioning and tracking at the required angle with the sun’s incident angle or azimuth according to the experimental requirements, and at the same time, it can form a linear and spherical-type tracking device.

The system is composed of a base, a product test bench, a lead screw, a gear box, a motor, a computer controller, a sensor, and a power supply. The system tracking software runs according to the combination of the sun’s trajectory and light tracking. Two-dimensional automatic tracking mode (tracking the sun from east to west) is adopted, and the sun’s declination angle is automatically adjusted (the system automatically displays the local sun’s declination angle). This function can realize automatic real-time tracking of the sun all-weather.

Most photovoltaic solar tracking devices use photoelectric tracking and solar tracking. These two methods require solar photoelectric sensor/controller and clock program controller, motor drive power supply, charge and discharge controller, etc. The intermediate links are more complicated, and the working environment temperature cannot be too high or too low. The trajectory tracking according to the sun is divided into two types, single axis and dual axis, to achieve 2-degree-of-freedom steering control of azimuth and pitch angle. Because the solar energy utilization rate of single-axis tracking is not ideal, most of the current photovoltaic power generation solar tracking devices use dual-axis tracking with higher tracking accuracy, which can generally increase the power generation efficiency by about 30%, and the concentrating tracking system will be higher. In addition, there is a method in which the photoelectric tracking and the day-to-day motion trajectory tracking methods are used in one tracking action at the same time, which further improves the accuracy and reliability of the system.

In the photovoltaic power generation industry, large-scale solar tracking mechanisms have the following technical problems: gearboxes are often damaged, maintenance costs are high, and normal power generation is impossible. The reason is that its intermittent tracking technology is flawed. The angular acceleration is too large when starting, especially when stopping, the gearbox will be destroyed in a short time, which will eventually lead to failure of normal operation. According to literature reports, there is a solar power supply device and tracking device that can increase the efficiency of solar cells by 8 to 10 times; it can also have multiple identical device combinations to adapt to large, medium and small solar power supply devices of different scales, and the solar silicon wafer has a long service life.

Photovoltaic cells have nonlinear photovoltaic characteristics. Even under the same light intensity, because different loads have different power outputs, photovoltaic cells are not directly connected to the load, but a conversion device is used to keep the output power of the solar energy at the maximum state it can output, and then supply power to the load, the so-called maximum power tracker. The output power control of photovoltaic cells mainly uses CVT technology. The CVT control method has the advantages of simple control, high reliability, good stability, and easy realization. It is expected to obtain 20% more electric energy than ordinary photovoltaic systems. However, this tracking method ignores the influence of temperature on the open circuit voltage of the solar cell. Taking monocrystalline silicon solar cells as an example, when the ambient temperature rises by 1°C, the drop rate of the open circuit voltage is 0.35%~0.45%. The CVT control method cannot fully track the maximum power under all temperature environments. With the development of microelectronics and power electronics technology, the maximum power point tracking technology MPPT can enable the system to track the maximum power of the solar cell under any temperature and sunlight conditions, showing its outstanding technical advantages.