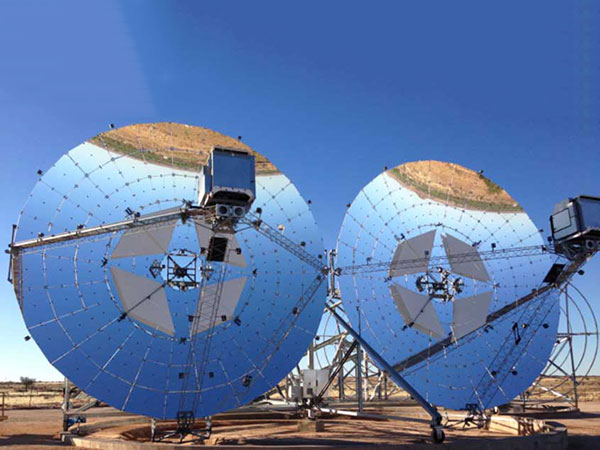 As shown in Figure 1, the light superimposed reflection device has a three-layer or more than three-layer ring structure, that is, the first and last mirrors of each layer are connected end to end. From the inside to the outside, the mirror unit of the first layer is a trapezoid or oblique plane. The oblique plane is an oblique line rotating around the central axis of the ring mirror by an angle of α, 0<α≤l80°; each mirror unit of the first layer corresponds to each mirror unit X of each layer from the second to the last layer and is arranged side by side in a row, and two adjacent rows of reflective units are provided with N mirror units Y on the corresponding mirror layer.

The mirror units of the light superimposing reflection device are arranged in rows, which can be controlled to prevent the mirror units from being unable to project on the silicon wafer when part of the sunlight reflects in the lateral direction;

The mirror units are arranged in layers, which can prevent the mirror units from being unable to project on the silicon wafer when part of the sunlight reflects in the longitudinal direction;

Reflecting mirror units are arranged between two adjacent rows to make full use of the sunlight projected in the light superimposing reflection device. Keep a certain gap between the reflector unit groups in each column, which can play an air leakage effect, can effectively reduce the wind resistance, and reduce the damage to the equipment due to strong wind.

As shown in Fig. 4, the mounting bracket of a light superimposing reflection device is provided with a bearing arm 71 at the corresponding position of each column of the mirror group, and the rigid material 72 is used to pull and locate between adjacent bearing arms to form a mesh structure. The mirror unit can be placed on the corresponding grid with a certain gap to reduce resistance, which not only can effectively strengthen the load-bearing arm and play a role in positioning, but also can reduce the quality of the reflective superimposed mirror mounting bracket.

Each reflecting unit of the light superposition reflecting device can be equipped with 8+8 reflecting mirrors in a ring-shaped range. Therefore, the 5-layer structure can be equipped with 64 mirrors, and if it is 6-layer, 16 mirrors can be added. As long as the heat generation of the silicon wafer can be controlled, the efficiency of the silicon wafer can be maximized within a ring-shaped concentration range.

The above-mentioned light superimposed reflection device structure can choose the corresponding number of layers according to the intensity of sunlight in various places, and multi-layers can be selected for low light intensity, and on the contrary, fewer layers can be selected; the size and shape of the reflector unit X or Y can satisfy that the reflected sunlight can be completely projected on the solar wafer; the reflector unit Y between the two rows of reflector unit groups can be more than one piece, and can be triangular or other shapes; the use of a hollow reflector can reduce wind resistance and facilitate drainage, making the device more compact and lighter.