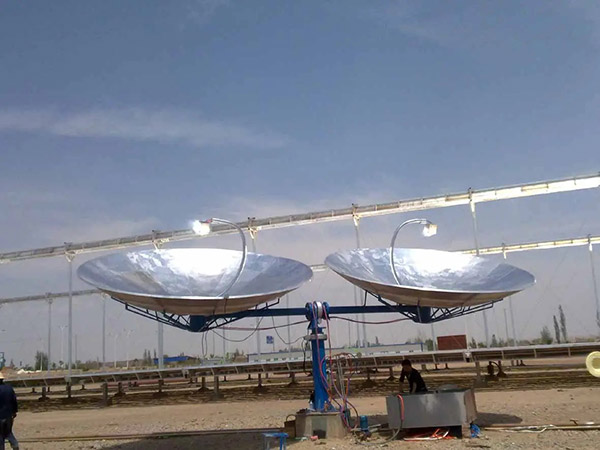 There are generally two types of concentrators: reflective and refracting. The main two are described below.

The Fresnel lens is transformed from a semi-circular lens. Figure 1 is a schematic diagram of a Fresnel lens concentrating light. The angle between the refraction surface of each tooth slot and the lens plane is determined by the refractive index of the lens material, the focal length of the lens, and the distance from each tooth to the center of the lens. The condensing multiple of this lens can theoretically reach 10,000 times, but in practice, it is usually dozens of times. Experiments have shown that at noon on a clear day, the temperature at the focal zone of the Fresnel lens can reach more than 20°C, which is 4 to 5 times higher.

The CPC concentrator consists of two rotating paraboloids symmetrical to the central axis of the photovoltaic cell, and the vacuum tube encapsulating the photovoltaic cell is placed at the bottom. The bottom ends of the two parabolas are the foci of the opposite parabola, and the line connecting the focus of one parabola to the vertex must be parallel to the axis of the other parabola. As shown in Figure 2, the designed two-dimensional cross-sectional graph of the compound parabolic reflector consists of two parabolas and two involutes.

Taking the center of the vacuum tube as the origin to establish a rectangular coordinate system, the parametric coordinate equation of the CCP cross-section is obtained:

In the formula, L is the length of the tangent from the point of the reflector to the vacuum tube; Φ is the angle between the tangent and the negative direction of the Y-axis.