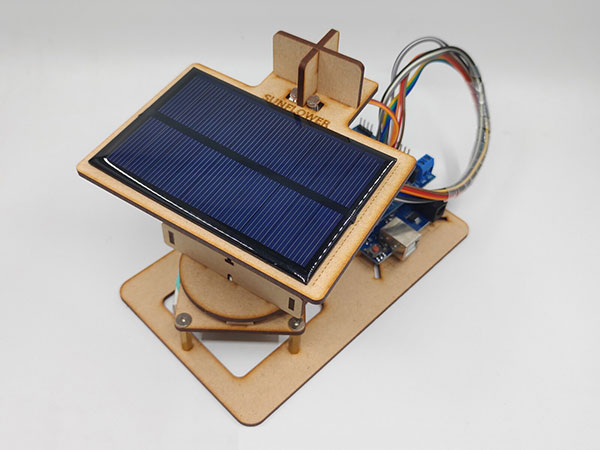 The solar automatic tracking concentrating photovoltaic power generation system controlled by a single-chip microcomputer has the characteristics of high tracking accuracy, large tracking range, and easy real-time control. The system uses a refraction condenser to condense a larger area of sunlight in a smaller area to form a focal spot or focal zone, and place the solar cell on this focal spot or focal zone. This focusing method increases the light energy density of sunlight by more than 400 times, increases the conversion efficiency of solar cells, and can obtain large currents on a small-area monocrystalline silicon wafer. The photovoltaic power generation system is mainly composed of a concentrating cell array, azimuth and elevation drivers, trackers, controllers, brackets, etc., as shown in Figure 1.

Among them, the concentrating cell array is composed of several concentrating cells in series and parallel. For crystalline silicon solar cells, generally low-magnification condensing, proper consideration of heat dissipation conditions is enough. If the concentrating magnification is increased to more than tens of times, the photoelectric conversion efficiency of the concentrating solar cell should generally be greater than 20%, and it must be resistant to high-magnification solar radiation, especially the photoelectric conversion performance at higher temperatures must be guaranteed. Therefore, some special considerations must be made in the selection of semiconductor materials, battery structure and grid line design. At this time, ordinary crystalline silicon solar cells cannot bear it, and special materials and battery structures must be used to manufacture concentrating solar cells.

The solar concentrator uses a Fresnel lens, which is made by using the principle of light refraction at the interface of different media, which has the same function as a general spherical lens. It is the main component of the concentrating battery module, which has the characteristics of small size, light weight, convenient processing, and high light transmittance. A Fresnel lens with a large diameter can be made very thin, which can greatly reduce the quality of the lens compared with a spherical lens. On the one hand, it focuses the sunlight, on the other hand, it also protects the battery components. It is a part of the battery module cover. The radiator of the battery module is located in the shadow of the battery cover (normal tracking state) and is not exposed to direct sunlight, so it is easy to dissipate heat, so that the battery temperature is low and the efficiency is high.

The basic structure of the tracking system is shown in Figure 2, which is mainly composed of a single chip microcomputer, a sensor, and a stepping motor. Its basic principle is: when the sun shines on the sensor, the sensor signal given by the position deviation between the battery array and the sun (that is, when the array plane is not perpendicular to the sun) is amplified by the preamplifier and the voltage follower is stored in the single-chip microcomputer; after a certain processing by the single-chip microcomputer, the stepping motor is controlled to rotate, so that the concentrator moves with the movement of the sun, so as to achieve the purpose of tracking.