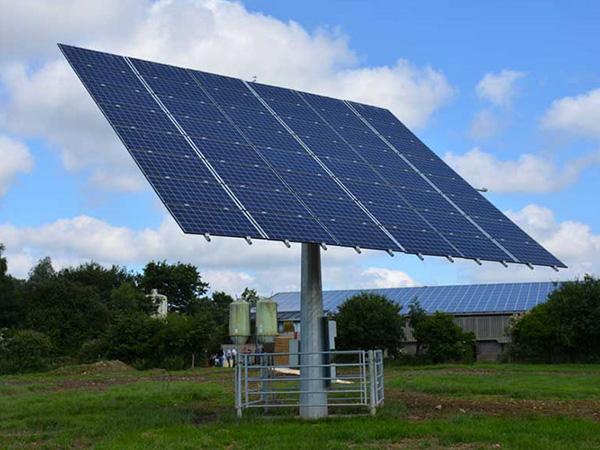 According to the number of degrees of freedom of the mechanism, the sun tracking device can be divided into two types: single axis and dual axis.

The single-axis tracking device has 3 layout modes: ① Tilt layout, east-west tracking; ② Focal line horizontally arranged north-south, east-west tracking; ③ Focal line horizontally arranged east-west, north-south tracking. These three methods are single-axis rotating north-south or east-west tracking, and their working principles are basically similar. The principle of the third tracking method is: the axis of rotation (or focal line) of the tracking system is arranged in the east-west direction, and the cylindrical parabolic mirror rotates pitching around the axis of rotation to track the sun according to the change of the sun’s declination angle calculated in advance. With this tracking method, only the sun’s rays are perpendicular to the generatrix of the cylindrical paraboloid at noon in a day, when the heat flow is the largest; and the sun’s rays are oblique in the morning or afternoon. The advantage of single-axis tracking is that the structure is simple, but because the incident light cannot always be parallel to the main optical axis, the effect of collecting solar energy is not good.

The solar declination δ on the nth day in 1a is calculated as:

It can be seen from equations (1) and (2) that when δ, ω, and Φ are determined, the values of the inclination angle β and the azimuth angle γ of the worktable determine the incident angle θ of the sunlight. Therefore, as long as the angle of the workbench is controlled to have a proper inclination and azimuth angle, it is possible to ensure that the sunlight incident angle θ is 0, so as to maximize the collection of solar energy.