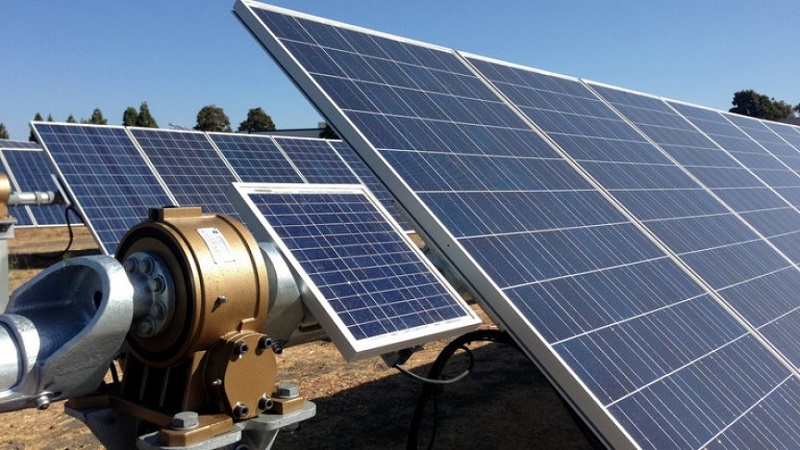 There are many ways to track the sun, but there are only two ways to use photoelectric tracking and tracking according to the trajectory of the sun. The latter tracking method can be further divided into dual-axis tracking and single-axis tracking.

Single-axis tracking generally adopts the following three tracking methods: inclined arrangement, east-west tracking; focal line north-south horizontal arrangement, east-west tracking; focal line east-west horizontal arrangement, north-south tracking. These three methods are basically north-south or east-west tracking with single-axis rotation, and the working principles are basically similar. Taking the third tracking method as an example, the principle of single-axis tracking is described. Figure 3-1 shows the principle of this tracking method. The axis of rotation (or focal line) of the tracking system is arranged in an east-west direction. Then, according to the change of the sun’s declination angle, the cylindrical parabolic mirror is made to pitch and rotate around the rotation axis to track the sun. When this tracking method is adopted, only at noon in the day the sunlight is perpendicular to the generatrix of the cylindrical paraboloid, and the heat flow is the largest at this time. In the morning or afternoon, the sun’s rays are oblique, so the change of heat flow during the day is relatively large. The single-axis tracking method is characterized by a simple structure, but because the incident light cannot always be parallel to the main optical axis, it is not ideal for collecting solar energy. If the sun can be tracked in both the solar altitude and the declination angle, the most solar energy can be obtained, and the full tracking, that is, dual-axis tracking, is designed according to such requirements.

One axis of the polar-axis full-tracking condenser points to the north pole of the celestial sphere, that is, it is parallel to the rotation axis of the earth, so it is called the polar axis. The other axis is perpendicular to the polar axis and is called the declination axis. When working, the mirror surface only needs to rotate around the polar axis with a fixed rotation speed in the same direction and opposite to the angular velocity of the earth’s rotation to track the apparent diurnal movement of the sun. In addition, the reflector is rotated intermittently around the declination axis to adapt to the change of the declination angle according to the seasonal changes. This tracking method is not complicated, but the quality of the mirror does not pass through the polar axis, which makes the design of the polar support device difficult.

The tracking algorithm mainly solves two main problems: one is to track the azimuth angle of the sun, which can be controlled by a servo motor driven by a horizontal working turntable. The second is to track the altitude of the sun. Another servo motor can convert circular motion into linear motion through pulleys and lead screws, and change the inclination of the collector to align with the sun.