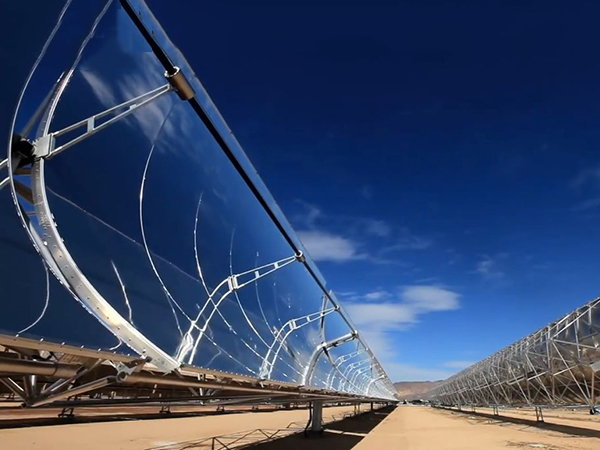 Low-temperature solar thermal power generation usually uses flat-plate collectors or flat-cylindrical parabolic collectors to collect heat to obtain heat of about 100°C, and then generate low-boiling steam through low-temperature media (Freon, isobutane, etc.), and use this steam to drive the steam turbine generator set to generate electricity. There is also the use of solar pond heat storage to generate electricity, which also belongs to low-temperature solar thermal power generation.

The trough-type condenser mirror focuses the sunlight on a line, and a tubular heat collector is installed on this focusing line to absorb the focused solar radiation energy. After the fluid in the tube is heated, it flows through the heat exchanger to heat the working fluid, and generates electricity by means of the steam power cycle. The parabola faces the sun for one-dimensional tracking (the device is placed north-south on the axis of the device, and then it rotates east-west to track), the concentration ratio is between 10 and 100, and the temperature range can reach 400°C. The thermal power generation system of this structure was developed in the mid-1980s. So far, a 354 MW trough concentrating thermal power station has been installed in California. The working medium is heat transfer oil. The heat transfer oil can generate 390 ℃ superheated steam through a heat exchanger to drive a steam turbine to generate electricity. This system was developed by the American LUZ company. Since 1984, a variety of systems of 14, 30 and 80 MW have been developed, with a total installed capacity of 354 MW. From 1985 to 1991, the company built 9 trough solar thermal power stations in the California desert, with a total installed capacity of 353.8 MW. The investment in the power station was reduced from US$5,976/kW for No. 1 power station to US$3,011/kW for No. 8 power station. The cost of power generation has dropped from 26.5 cents/kWh to 8.9 cents/kWh. The company is full of confidence and plans to build a trough solar thermal power station with an installed capacity of 800MW in California by 2000, and the cost of power generation will be reduced to 5-6 cents/kWh. Regrettably, the plan was interrupted by the bankruptcy of Luz in 1991.